Transcript of a conversation I had with my brother, J, on Sunday:

J: Dude, I can’t believe I’m almost thirty and I’m sleeping on the floor of my room because my mattress sucks so badly that both ends of it lift up when I get in the middle of it.

Me: Dude, I can’t believe I’m almost thirty and I woke up in the bed of my truck at six o’clock this morning still drunk.

Me: True.  God, I really need to put a blanket back there.

Transcript of a conversation I had with my mother on Sunday:

Mom: Did you really sleep in your car last night?

Me: Who gave you that insane idea?

Me: Absolutely not. What do I look like? A crazy person?

Mom: Oh good, because that is really dangerous.

Me: Of course it is.  Did J tell you that he’s broke because he spent the rest of his money on some hookers and an eight-ball this weekend? Yeah, I think you should call him about that. Like right now.

This weekend ranks as one of the top five weekends of the past year.  Friday night on my way home from the gym, some friends called and invited me to the Exotic Dancer National Championships at the Pink Pony South.  We got to see the amateur category and the best girl of the night poured vodka all over her body and then lit herself on fire. WOW! Note to self: Learn this talent as soon as possible.  For those of you who have not been to the Pink Pony’s south location, it is unbelievably nice and huge compared to the one on Buford Highway.  Not only that, but it has a sushi bar at the very top of it where you can sit and watch the stage from a bird’s eye point of view.  I didn’t try it.  Something about sushi and strip clubs didn’t seem to go together very well.

Saturday, Dr. V and I hit up the East Atlanta Beer Festival. 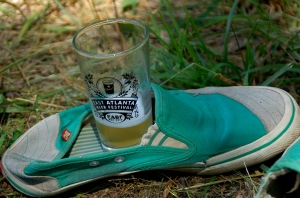 Wow! again.  The weekend kept getting better and better.  We tried to keep track of all of the beers, but personally I lost count after I was forced to pee in the bushes and some guy yelled out at me, “I can see you!” There were hundreds of people and it was hot as almighty hell, but everyone was in a great mood and I did not see one single fight or verbal altercation.  Of all the beers we tried the Allagash Curieux was our favorite, along with another beer that had a really nice aftertaste of blueberries.  Sorry, the name escapes me at the moment.

Morelli’s ice cream had a stand at the beer fest so we took the opportunity to split two scoops of the Guinness chocolate.  I love Guinness. I love ice cream. Thank you lord for giving someone the foresight to blend the two together. 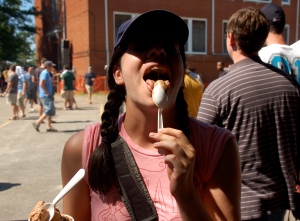 We also made some nice new friends: 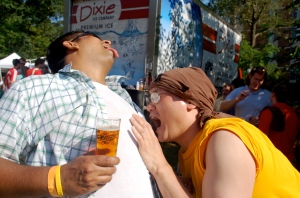 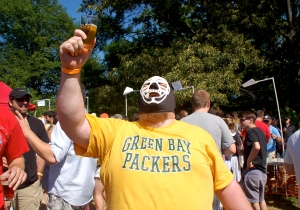 This entry was posted in Awkward Conversations, Food. Bookmark the permalink.