Is it because I went to Wal-Mart tonight?

Do you know how many times I’ve restrained myself from standing in line at the mall this week and whispering in children’s ears the truth about you and Mrs. Claus before they got their pictures taken with your so-called stand-in? Many.

So tell me, why did I get pulled over again tonight? After I had gotten in the holiday spirit and gone to buy a tree and lights, loaded them into the truck and decided to make an illegal u-turn RIGHT IN FRONT OF A POLICE CAR.  Tell me.  Why do you insist on making me spend the holidays in a courtroom arguing with a judge over the lack of proper street signage?

When I was a child, after years of fighting over their stylistic differences between what made a Christmas tree a proper Christmas tree, my parents finally decided on their version of a compromise: they bought two separate trees.  Dad’s had multi-colored lights and was displayed in the den, while mom’s had all-white lights and went in the living room.  I never really questioned why they ended up divorced several years later, but the image of the two trees stuck with me.  Symbols of their individuality and refusal to bend to one another’s will.

So tonight I went out and bought my very own tree for the first time. And guess what? I couldn’t decide on what kind of lights to get.  I tried to think back to which parent’s tree I preferred as a child.  Mom’s elegant Christmas-cover award-winning display, or dad’s kitchtastic array of splendor.  In the end, I decided to go with a blend of both.  And I realized, that’s what makes me ME.  I am a perfect blend of two people with completely opposing genetic taste buds. 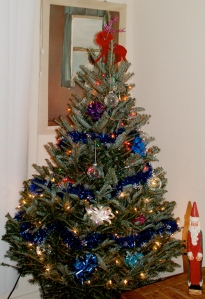 I was supposed to wait until tomorrow to get my tree with mom, but sometimes I get the urge to do something from start to finish by myself and I can’t let it go. It’s what has always separated me from the rest of my family.  A need to be completely alone.  To do things my own way.

Mom called when I was in the check out line and she was appalled that I had ditched our plans and decided to do it myself.  But there is honestly a certain joy in starting my own traditions.  Doing things by yourself is 100 times harder than when you have another person around.  I am convinced sometimes that it’s the sole reason why we cohabitate, or get married for that matter.  Try to put something together from Ikea by yourself and you’ll know what I mean.

But maybe it’s because your significant other compliments the skills you lack. And if you’ve found that you feel lucky, and even if Santa obviously got your Christmas list mixed up with someone naughty who loves traffic citations and curdled egg nog, you know what you have and you feel like the luckiest person in the solar system.

This entry was posted in Uncategorized. Bookmark the permalink.