After spending four days fishing in Ft. Smith, we still had four days left to kill before making it to Kalispell, our final destination and home until October (when we get the hell out of here and go back to New Orleans because it gets so cold here your blood turns to ice).  I asked if we could spend one day in Yellowstone since I’d never been there before and every now and then I like to get nutty and force myself to interact with other fatuous tourists who think the word “Park” is synonymous with “Disney World.”

Amidst the throng of RVs and smelly humans in cut-offs and doo-rags, I saw a coyote stalk its prey (these really cute little gophers who are unfortunately now ripped to shreds), elk, deer, and one gigantic bison that would have made the best bison burger at Ted’s Montana Grill you’ve ever tasted.  What would you do if you were handed this pamphlet upon entering the park?

Well, if’ you’re a Spaniard, obviously you mistake it for a Bull and try to toro its ass.  Because you’re stupid.  And you were born inferior to other Spanish speakers.  And you have a funny lisp.

This picture does not even come close to doing justice to what I witnessed.  I couldn’t bring myself to photograph my fellow-Spanish speakers being so dumb.  Maybe the park should have the pamphlet translated because obviously the very detailed picture of a person getting gored just doesn’t do it for some people. 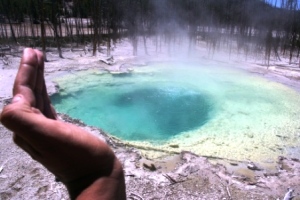 After leaving the park and going into the town of West Yellowstone, we realized there were no vacancies left for the night.  Luckily, a place called the Parade Rest Ranch had a cabin available 8 miles away from the center of town.  I highly recommend this place.  The cabin was a welcome change from camping and motels.  And sleeping in a real bed was incredible after having spent the night before in a two-man tent resting on VERY hard gravel squeezed in between my boyfriend and his brother–the ultimate dutch oven and claustrophobia inducing circumstances of my life.   The cabins are a little pricey but if you’ve been saving by camping most of the way, you should take the opportunity to treat yourself a little.

After leaving the Parade Rest, we spent two great nights camping by the Madison River and Rock Creek and ended up on Saturday in Missoula at the Thunderbird Motel.  Again, the Thunderbird was perfect for what we needed: hot showers, wifi, and beds.  For $80.00 it was the best deal in town.

One of our main reasons for stopping in Missoula was to visit the Fox Club Cabaret.  I actually looked it up at the start of our trip thinking that if I was going to spend a week camping, fishing, and generally being dirty and smelly than the last night was going to be spent pretty, clean, and at a strip club.  The Southerner and his brother didn’t seem to mind my request.

The Fox Club is full-nude with pool tables, a poker table, and excellent bartenders who spent the whole night buying us drinks or severely reducing the price of the drinks they charged us for.  We are really good tippers and they were having an extremely slow night so I think this contributed to the level of their friendliness, but nonetheless I enjoyed it.  I don’t know why I love these places.  They fascinate me.  Animal behaviour at its most unrefined and base.

We left Missoula in the morning and drove the 111 miles to our new summer residence.

This entry was posted in Montana. Bookmark the permalink.