About a month ago, I enrolled in a canning class at the local community college here in Kalispell.  The class consisted of two 3 hour sessions  and my thinking was that I would learn how to preserve and make jam out of all of the huckleberries we wanted to pick during our stay here. When I told my mother I was going to take a class on canning she laughed her ass off.  Her child, the one who refused to believe that shaking a bottle of tonic water would cause it to explode all over the place, was going to process food???

The Southerner predicted I wouldn’t make it through the first class.  Not because he doesn’t have faith in me, but because he knows me and because he’s a shrink for a living– which means he can read my mind at any given moment of the day.  He’s talented like that.  He knows that I don’t do well in social situations that require small talk and involve large groups of women.  Especially, middle-aged women who actually owned an apron before they signed up for the class.

I made it through all three hours of the first class and had fun, but by the time the second class rolled around I spent two hours torturing myself before making an executive decision that I had this canning thing in the bag and the second class wasn’t necessary.  WRONG.

Ten minutes into canning a batch of huckleberries last night, we heard a large BANG! come from the kitchen.  This was definitely not a noise I learned about in class.  Not wanting to disrupt the canning process, I just warned the Southerner not to step foot in the kitchen until the timer ran out and I was able to assess the damage:

Me: Don’t walk into the kitchen until the timer beeps on the microwave.

The Southerner: Why? Are you worried that I’ll walk into the kitchen and the rest of the huckleberries will explode in my face and I’ll die because you never went to that 2nd canning class? 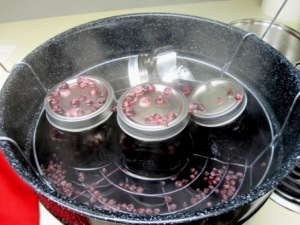 This entry was posted in Montana and tagged Montana. Bookmark the permalink.