Dad just left after visiting us for a week.  He brought me very important necessities: Aveda shampoo and conditioner, Hunter rainboots, and Goya (the only spice any self-respecting Venezuelan should always have in her pantry).  Oh, and one surprise, my mom’s bathrobe.  That woman never ceases to amaze me with her innate ability to know exactly what will make me miss her the most.

Unfortunately, Dad got sick a day after getting here but we still had a great time.  Or at the least the Southerner and I did while dragging Dad along with us.

On his first day, we all bungee jumped together in downtown Wellington.  All I can say is: never bungee jump in a mini skirt.  On Tuesday, we took a short flight to the South Island to visit Abel Tasman National Park.  The park and the guided kayak tour we took around the park was one of the highlights of our time here in New Zealand so far.

Our guide did a great job of giving us frequent kayak breaks and when this one French bitch (I only refer to her like this because the Southerner heard her mutter the words “skinny bitch” while looking in my direction) started hyperventilating and crying because the waves got a little rough, I was super impressed by the guide’s ability to calm her down using what amounted to sign language since they didn’t speak each other’s language.

If you’re ever planning a trip to Abel Tasman, beware of the sand flies and bring some kind of really toxic bug spray.  The kind that will either kill you or the bug; if it’s you, you won’t care because if it doesn’t kill the bug you’ll wish you were dead anyway.  My arms and legs are covered in red bumps and I’m still itchy five days later.

After returning to Wellington from the South Island, we jumped in our car and headed to the Wairarapa region for a wine festival.  We stayed at the Greytown hotel again and enjoyed a spectacular bottle of wine together on the hotel balcony while soaking up the sun.  Saturday, we went to the Harvest Wine Festival and the weather could not have been more amazing.

I love festivals.  Mainly because they usually involve rows of tents filled with different kinds of food and booze I can’t wait to try.  I meticulously inspected each tent before deciding to eat a honey and bacon infused brat filled with grilled onions and tomato sauce*, and try every wine within the realm of possibility. We ended the day finishing our last glass of wine by the Ruamahanga River and Dad took a well deserved snooze. 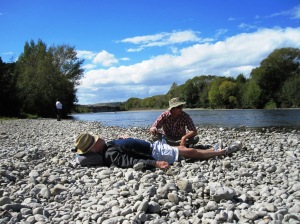 When we returned to our hotel, the Southerner and I decided to play the slot machines while still slightly inebriated.  I put $20 in the machine and randomly started hitting buttons and all of sudden the Pink Panther appeared on my screen with a top hat and cane while dancing to loud music.  I swear I was not high.  It took me a minute to realize I’d won $500.  I won $500! I never win anything.  It’s probably all of those Pink Panther records I owned as a kid. Thank you, Pink Panther.

Sunday, we woke up and drove to Pukaha, Mount Bruce bird sanctuary in search of seeing a Kiwi before Dad left. Listening to Dad make kissy noises at the birds and try to imitate their calls was my absolute favorite part of the whole trip.

While this didn’t exactly work in attracting the birds to our field of vision, it certainly made for an entertaining walk.  (Dad and the Southerner seem to share a  common delight in trying to embarrass me in public as much as possible.  While I am hell-bent on not furthering the stereotype of the ignorant American, the Southerner went out of his way to “co-mo ta-le vouuus” the Frenchies on our kayak trip with his worst Southern infused French accent. And Dad kept Danke-Schoning the German owner of our hotel in Nelson every chance he got.  You have to hear them to understand.  They are not trying to be polite.  They are trying to torture me.)

Before Dad left Sunday evening, we shared a meal of homemade chicken soup, fresh plums, the best chocolate ever, and a bottle of wine from the festival. For me, there could not be a better way to spend our last hour together than sharing a meal in my home. While Dad was getting ready for dinner he called me to his room with that tone of voice that used to scare the crap out of me when I was a kid, the tone of voice that said “I just caught you making out with your boyfriend in my driveway and you are in deep shit.” His serious tone.  However, he totally caught me off guard by handing me some spending money and thanking me for the wonderful trip.  Whew! Thanks Dad, but we need to work on your delivery method next time :).

*I’ve finally given up trying to ask for “ketchup” here.  I’m tired of getting alien looks.  And don’t even try asking for a packet of mayonnaise anywhere in New Zealand.  You might as well ask for a packet of vaginal discharge from the looks you’ll get.  Asking for condiments in general seems to be frowned upon.  In fact, asking for any type of customized order is also frowned upon or met with extreme confusion.  Like the first time I tried to order a cheeseburger with just “ketchup and cheese” at the McDonalds here and the woman actually asked me if I meant that I wanted her to leave out the meat patty.  I’ve always ordered my cheeseburger like this in the States and NOT ONCE has anyone asked me if “just ketchup and cheese” meant that I didn’t want the meat. Kiwis seem to be a more literal people than Americans.  Since I’m a glutton for punishment, I tried to order my burger the same way again at another McDonalds and met with the exact same results.  Except, the second time around I was with the Southerner which meant it took a lot more self-control not to start uncontrollably laughing at the drive-through intercom. He pointed out that if they really took the just “ketchup and cheese” thing literally I’d also be left without the buns.

This entry was posted in Family, New Zealand. Bookmark the permalink.