Just in case you’ve forgotten the main points of Part I: the Southerner decided on an uncut diamond and a mangrove-inspired setting for our engagement ring. Forgotten what a mangrove looks like? Let me refresh your memory…

Gratuitous shot of a ghost standing next to a mangrove.

Okay, glad we’re all on the same page.  Now, I’ll let the Southerner finish the story in his own words:

The first jeweler I went to in St. Pete was bright white and flashy.  The second I walked in I knew it was a mistake.  Three people started talking to me at once and the co-owner and wife of the other owner/jeweler never really stopped.  She had this pink streak in her hair that kept flopping around every time she said the words “Steven Kretchmer.”  Of course, they were having a Steven Kretchmer show that day.  I presented my idea and she said, “I can see you’re an earthy kind of guy and that’s a nice sentiment, but I don’t think you want to go with that.”  (I don’t think there is anything even remotely ‘earthy’ about my personality.)  She eventually came around to the idea of an uncut stone but insisted my setting design was “impossible.”  She kept pushing a tension setting by Kretchmer and telling me how famous he is and blah, blah, blah.  When discussing getting some stones to look at and telling her I’d seen some nice ones online in different colors she concluded, “I wouldn’t even make a ring with a stone that was highly colored or had internal impurities.”  She also recommended that using a stone from the internet is not safe.

Fairly demoralized, I left the store and almost went home to re-group.  I mean,  is ‘tension’ really what I want there to be in my symbolic engagement ring?  But I was dressed in my suit and had my excuse, and damn if I was going to let that lady put me off, so I went to the next store.

Bruce Watter’s jewelry store is quieter, calmer, and has more of an old-school Sinatra feel to it.  An older man walked up and asked if he could help.  I thought, “this guy is never going to go for my idea.”  When I told him what I was interested in he was just silent and stared at me for a few long seconds.  I was pretty sure he was going to blow me off.  But instead, he said, “That’s one of the most interesting ideas I’ve heard in a while, let’s sit down and talk about it.”

At the end of the day, he basically said that what I wanted was very doable, a bit risky, might cost a little more for the intricacy of the setting, and we had to use white gold instead of platinum due to all the bending, joining etc. needed to make the design.  But, he was excited about my project.  He told me, “I can get a half million dollars worth of (gesturing to his collections) this kind of stuff, but I have no idea how to get an uncut stone. You handle the stone, I’ll handle the ring.”

I ended up going with AAA diamonds Ebay store.  Going through Ebay/PayPal is a good choice because you have 30 days to cancel.  I liked the diamond I got, but it had a small chip at one apex and the jeweler said it could fracture. Avner, at AAA, was great and let me return the diamond for another one that I ended up liking even better.  I highly recommend them.

In the end, this is what we got. 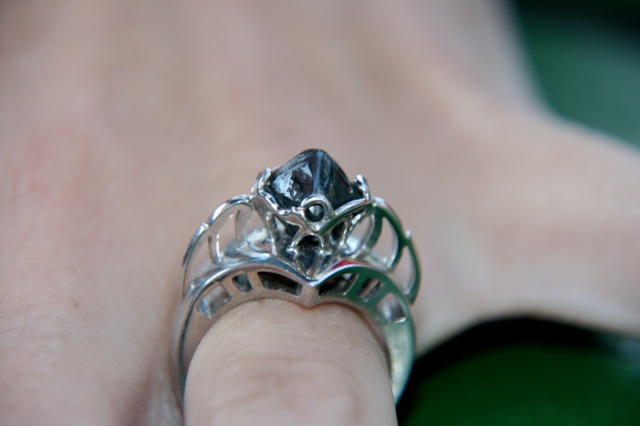 It’s an uncut, black diamond.  The shape is an octahedron.  While not the dodec, it’s still one of the Platonic solids and it just looks cool. 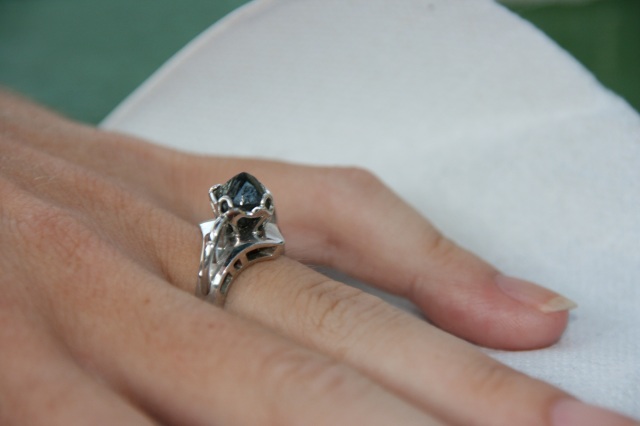 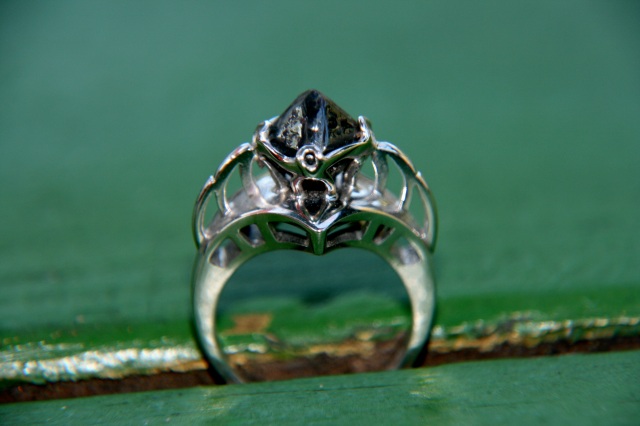 The Venezuelan and the Southerner couldn’t be happier.

This entry was posted in Wedding. Bookmark the permalink.